The Language Secretariat of Greenland 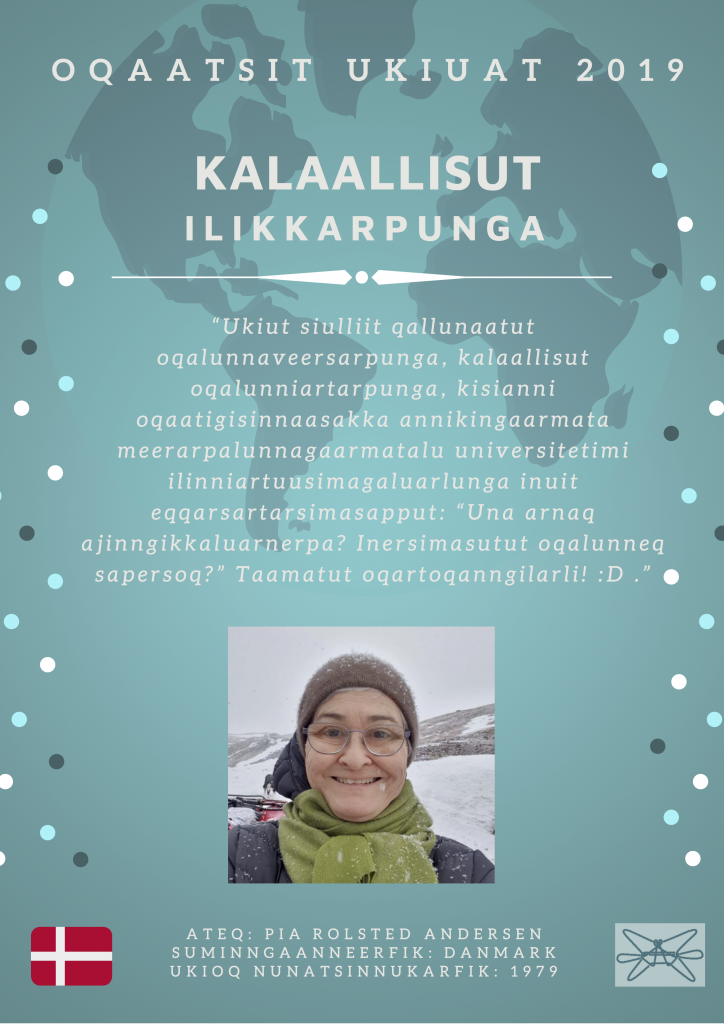 The year you arrived to Greenland: 1979

You first thoughts about Kalaallisut language:

I don’t remember what my first thoughts were the first time I listened to spoken Greenlandic, it has been forty years! ;) but as I had fallen in love with Greenland and a (greenlandic) man (my husband) it must have sounded like sweet music to my ears!

What was your motivation to learn Kalaallisut?

I started learning Greenlandic because i had fallen in love with the land and in a man (my husband) and wanted to return to Greenland. It also matters that my biological mother is Greenlandic, but I was adopted from birth and was born og grew up in Denmark with Danish parents.

What was the hardest in learning Kalaallisut?

I am still learning Greenlandic – every day I learn something new. Learning a language is a long proces! ;D

The first years I spoke the least Danish possible, I spoke in Greenlandic as best I could, but, eventhough at that time I was a university student (English), my Greenlandic was so poor and childish that people must have thought: “I wonder if this woman is quite allright, she cannot speak like a grown up?” :D

Then the following many years people used to say “pikkorik” – you’re good! – whenever I said something in Greenlandic.

After that, when my Greenlandic actually was better, people, who didn’nt know me tended to ask me why I spoke Greenlandic so poorly! :D Maybe they thought that I had grown up in Greenland with a Greenlandic mother or father.

At last, after having longer conversations with people who didn’t know me, they often asked me if I was Greenlandic. They can, ofcourse, hear that Greenlandic isn’t my mothertongue.

What was beneficial learning Kalaallisut?

-having a purpose, being motivated

-back in 1979-1980 attending an evening course in Greenlandic at Folkeuniversitetet, twice a week.

-talking to and communicating with my son in Greenlandic as well as I was able to from he was an infant. <3

– living on a sheepfarm/in the settlement Qassiarsuk amongst Greenlandic speaking people.

-teaching in school before I became a teacher trying to understand and communicate with my students.

-communicating in Greenlandic with my husband

-attending teachers collage in Nuuk, there I “met” a lot of dialects and I had special training in the Greenlandic language from a Greenlandic teacher, who had studied Greenlandic at the university.

-living in North-, Nuuk and in Southgreenland

-as a teacher having had to communicate and to attend meetings in Greenlandic with students, parents and collegues plus in the same way having developped my writing/reading skills.

What is the most important thing in learning Kalaallisut language?

-live it, eventhough you hardly understand anything at first and is rather confused the first years.

-lessons in Greenlandic can speed up the proces.

-at jeg har boet i nord, i Nuuk og i Sydgrønland